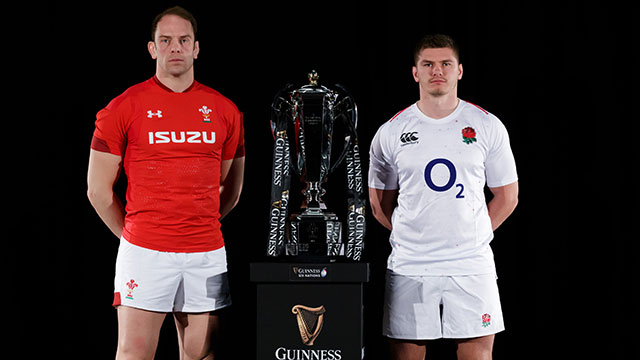 Wales and England - the two remaining unbeaten teams in this season's Six Nations - go head to head in Cardiff on Saturday. Here, we assess some key talking points ahead of the fixture.

England have recent edge over Wales

Wales have not beaten England in Six Nations action since the 2013 tournament, when two Alex Cuthbert tries underpinned a record 30-3 victory that shattered England's Grand Slam hopes. The five subsequent meetings have been close, with four games decided by six points or less, but England have always had just enough in the tank. If they can do it again - and with home games against Italy and Scotland looming next month - the title and Grand Slam is ready to be collected.

Are England the real deal?

On current evidence, yes. A bonus point win against tournament favourites Ireland in Dublin three weeks ago was a stunning statement of intent, and Eddie Jones' team followed it up by destroying hapless France 44-8 just over a week later. Wales in Cardiff is a substantial hurdle to overcome, but if England silence the dragon's roar then their already strong World Cup prospects will move to another level.

Wales calmly going about their business

Wales' Six Nations opening has been low-key when compared with England's blistering start. They trailed France 16-0 before fighting back to win, while a much-changed team laboured to victory over Italy in Rome. Wales, though, are unbeaten for a year and have won 11 games on the bounce, knowing that a win against England would break their all-time record set 109 years ago. Momentum counts for a huge amount in sport, and Wales currently have plenty of it.

Cardiff Blues fly-half Anscombe is still finding his feet in a Test match environment, but he performed well against England at Twickenham last season and has an ability to unlock defences, which Wales must maximise on Saturday. Anscombe's opposite number Farrell arrives in the Welsh capital as arguably the world's best player on current form, such is his influence as captain, playmaker, goalkicker and tactical controller. If Farrell takes charge, England will dominate.

England lost 13 successive games in Cardiff between 1965 and 1991, and although their record during the professional era is far better, the Principality Stadium can be an unforgiving arena for opposition teams. Wales are unbeaten there since world champions New Zealand toppled them in November 2017, and it promises to be a major test for England's Cardiff first-timers like Tom Curry, Mark Wilson, Ben Moon and Henry Slade.