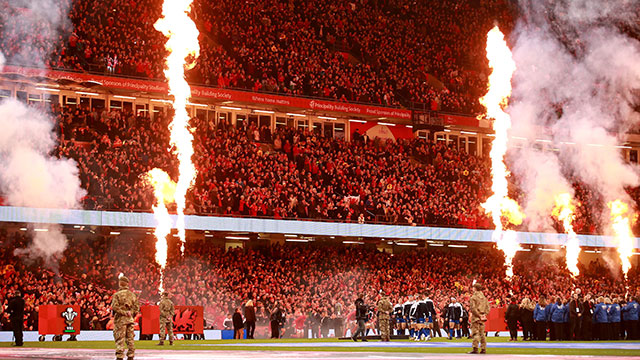 Wales will face Italy at the Principality Stadium (Adam Davy/PA)

Wales conclude their Six Nations campaign when they tackle Italy at Cardiff’s Principality Stadium on Saturday.

It has proved a frustrating campaign for last season’s champions, losing three games, albeit the last two defeats – against England and France – were by a total of eight points, while Italy are again resigned to finishing bottom of the championship.

Here, we assess some key talking points heading into the game.

After a dismal display on the tournament’s opening day in Dublin, losing 29-7 against Ireland, Wales could secure a top-three finish if they beat Italy with a bonus point. Should results involving England and Scotland then also go their way, then Wales would complete the podium places behind France and Ireland, who are battling it out for the title. Given pre-tournament injuries to several key personnel – the likes of George North, Leigh Halfpenny, Ken Owens and Justin Tipuric have played no part in the competition – it would represent a reasonable outcome for head coach Wayne Pivac, who has considerable credit in the bank following last season’s Six Nations title triumph.

Wales’ Six Nations finale will be a red-letter day for two of the finest players in Welsh rugby history – Dan Biggar and Alun Wyn Jones. Fly-half Biggar becomes only the seventh Welshman to win 100 caps, while Jones enters new territory for the world game as his 150th Wales cap beckons. It is fitting that their milestones will be reached in Cardiff, when an expected crowd of more than 60,000 can pay suitable homage. Biggar was planning a coffee with his team-mate this week to decide who will lead Wales out, but it would be no surprise to see them take the field together.

Wales were at their free-scoring best during last season’s Six Nations, running in 20 tries and finishing the tournament top of that list. This time around, though, it has proved a different story with only five touchdowns in four games – and three of those came during a dashing second-half display against England at Twickenham. Wales attack coach Stephen Jones said: “I think we have played in patches, if I am honest. Would I like to have crossed for more tries at this point in the campaign? Yes, is the answer to that, but we are working hard to make sure our attacking game is potent.”

Gloucester wing Rees-Zammit burst on to the Six Nations scene by scoring four tries in five games last term, and his spectacular solo touchdown against Fiji in November was a highlight of Wales’ Autumn Nations Series campaign. But it has been a tough few months for the 21-year-old, who played against Ireland after suffering an ankle problem during the warm-up, was omitted for Wales’ appointment with England and then had to be content with a place on the bench when Grand Slam-chasing France visited Cardiff. On a day when Wales can be expected to run in tries, though, it would be no surprise if Rees-Zammit leads the charge.

The Six Nations promotion and relegation debate is unlikely to go away while Italy keep losing and collecting wooden spoons. They are resigned to propping up the table for a seventh successive season, while it is seven years since their last Six Nations victory – a 22-19 win against Scotland at Murrayfield. The tally of losses currently stands at 36 on the bounce, and while there are glimmers of light provided by a promising Italy Under-20 squad – they beat England and Scotland this term – and the Azzurri’s current fly-half, 21-year-old Paolo Garbisi, results continue to submerge them. A heavy defeat in Cardiff would do nothing to silence the critics.