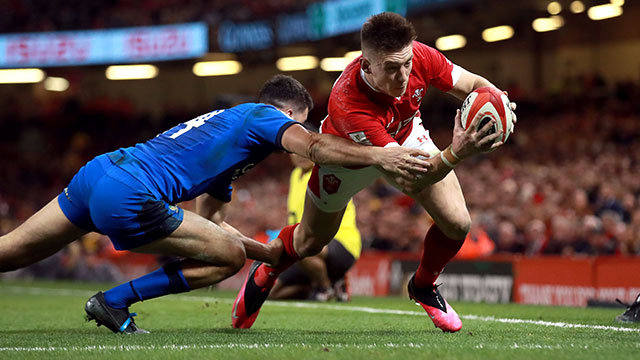 Wales made a strong start to their defence of the Six Nations title by beating Italy 42-0 at the Principality Stadium.

Fly-half Dan Biggar, who delivered an outrageous scoring pass for Adams' second try by flicking the ball at pace through his legs, kicked three penalties and a conversion to put Wales 21 points clear by the interval.

Biggar also converted Tompkins' score for a 13-point haul, although it took Wales until the 77th minute to claim an all-important fourth try when George North crossed and Leigh Halfpenny converted, before Halfpenny added the extras after Adams completed a treble.

For outclassed Italy, it was a 23rd successive Six Nations loss, and their next game is against France in Paris.

Pivac handed a Test debut to New Zealand-born Scarlets wing Johnny McNicholl, while number eight Taulupe Faletau made a first Wales appearance in almost two years and there were places on the bench for Tompkins and scrum-half Rhys Webb.

Wales made a bright start, gaining promising early territory on the back of a break by scrum-half Tomos Williams, and Biggar opened their account through a third-minute penalty.

Biggar doubled the advantage with another penalty eight minutes later, before Tompkins replaced McNicholl while he underwent a head injury assessment.

Italy were pinned back by some aggressive Wales running, with Williams injecting a real snap to Wales' attacking game, and Biggar completed his penalty hat-trick after just 15 minutes.

Pivac could not have wished for a more committed opening by his team, and they ended a dominant opening quarter by scoring the first try of this season's championship.

It was all down to speed of ball as Wales whipped possession wide, Halfpenny cut a decisive attacking line and Adams sped over before McNicholl rejoined the action.

Italy were behind the eight-ball, and Wales struck again 10 minutes before half-time as Adams claimed his second try following Biggar's cheeky assist.

The fly-half also converted, continuing a virtuoso contribution, as Wales opened up en emphatic advantage and promised more misery for Italy in the second period.

Italy, though, dominated the early stages of the second-half, keeping possession and patiently building phases as Pivac made a double change, sending on Tompkins for Hadleigh Parkes and Ross Moriarty, who replaced Faletau.

The Azzurri could not break down Wales' defence, but it proved a frustrating spell for the home side as they looked to complete the job and collect a five-point maximum.

Further reinforcements arrived off the Wales bench in prop Rob Evans and lock Cory Hill, yet it proved a third quarter to forget from a Welsh perspective after proving unable to increase their lead.

But normal service was resumed when Hill charged clear in midfield and Tompkins finished brilliantly from 40 metres, making it an occasion to savour for the newcomer, and Biggar's conversion.

A fourth try should have arrived just five minutes later when North sprinted clear, but the score was ruled out after video replays revealed a Tompkins knock-on.

Webb had joined the action by this stage for a first Wales appearance since December 2017, and North ensured a bonus point by scoring his 40th Wales try to move equal-second alongside Gareth Thomas on Wales' all-time list.

And there was still time for Adams to complete his hat-trick, with Halfpenny adding the conversion.