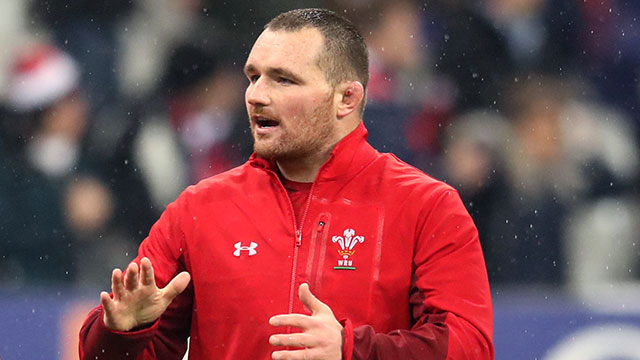 Ken Owens says Wales will concentrate on "controlling the controllables" as they prepare for next Saturday's Six Nations showdown against title rivals England.

England head coach Eddie Jones has already started the mind games by describing Owens and company as "the greatest Welsh side ever".

Jones also claimed that Cardiff's Principality Stadium "has never been a fortress for me" ahead of the tournament's two remaining unbeaten sides going head-to-head.

But for hooker Owens, who made his first appearance against England during Wales' 2012 Grand Slam campaign, it is like water off a duck's back.

"Perhaps early on in my career, you would get caught up in the hype. My first start for Wales was at Twickenham, which was a huge experience," Scarlets forward Owens said.

"But probably the more experienced you get, you just need to concentrate on what the important thing is, and that's the 80 minutes on the Saturday and delivering what you can control and controlling those controllables.

"I think as you get older, you sort of do detach yourself from it and do what you need to do to be right on Saturday.

"It is all a bit of fun with what is going on, but we know the job in hand and where we need to improve.

"We have had two wins on the road (against France and Italy), but we need to get better. If we don't, and England come down and play as they have in the last two games, they will teach us a lesson.

"They are a quality team, but so are we. The top two teams in the Six Nations, currently, will be going at it to maintain an unbeaten record."

Recent history in the fixture favours England, having claimed five-successive Six Nations victories against Wales, but they will encounter an opponent unbeaten for a record-equalling 11 games that stretches back to February last year.

Owen, though, says there is no talk of breaking records in the Wales camp as they look to eclipse a mark set between 1907 and 1910.

"There is no point talking about it until you've done it," he added. "The boys are pretty grounded.

"They are just taking it week by week, which is probably a bit boring, but we just talk about the next game, what we need to do to get the result and keep building momentum.

"I think we will be judged by our results in years to come when people start comparing this generation to the 70s, the 90s, whatever.

"All we can control is week-to-week matches, and keep winning. If we do that, then hopefully we will be remembered as not a bad side."

While Wales won in Paris and Rome, England demolished Ireland and France, playing some scintillating rugby that underlined their status as Six Nations favourites.

But Wales have strong title and Grand Slam ambitions of their own, and it promises to be a spectacular occasion in the Welsh capital.

"It's about imposing ourselves on England and keep asking questions of them, as I am sure they will be looking to ask questions of us. It's about just getting stuck into them, really," Owens said.

"These home games are won on emotion too, and it's about how you control that. I think the coaches have been spot-on with how they've handled that over the years.

"Training will be a little bit tasty, which it needs to be with what is coming up. You just build it up, and come Saturday, you can let it all out."