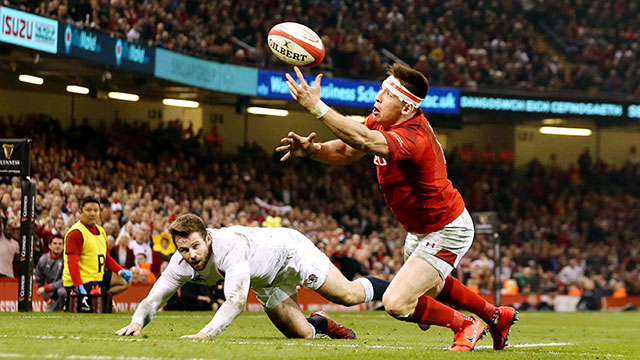 Warren Gatland celebrated his final Six Nations match against England with a dramatic 21-13 victory in Cardiff that continues Wales' march towards the Grand Slam.

Second-row Cory Hill forced his way over in the 68th minute after a lengthy period of Welsh resurgence to seize the lead for the first time, his team thriving amid the arrival of replacement fly-half Dan Biggar from the bench to direct the final quarter.

And bedlam ensued at the Principality Stadium in the closing moments when Josh Adams grabbed Biggar's crossfield kicked to touch down and confirm a famous win.

Gatland's first taste of success over opposite number Eddie Jones in four attempts also set a new national record of 12 consecutive victories and was a fitting way to end their Championship rivalry before the Kiwi steps down after the World Cup.

England led 10-3 at half-time and appeared destined to add Wales to their impressive list of emphatic results against Ireland and France, only to come apart at the seams after the interval.

Tom Curry and Kyle Sinckler made 16 tackles each in the first half alone, but it was the 20-year-old Sale openside who really shone in a display of relentless commitment that was headlined by a first-half try.

Sinckler, however, turned villain and left the pitch to a chorus of booing after conceding important penalties for a late tackle and wrestling Alun Wyn Jones around the neck at a point when England were wobbling.

Eddie Jones responded to the second infringement by immediately removing Sinckler and the ill-discipline supported Gatland's pre-match claim that the Harlequins prop is a "time bomb".

His withdrawal coincided with the collapse of his team as rattled England lost their heads.

For the last five Tests England have scored inside the opening three minutes, but at the Principality Stadium they came under ferocious early pressure that even dazed the usually unflappable Owen Farrell.

The tempo accelerated as Wales launched repeated attacks, scragging Farrell as he looked to step his way out of trouble.

But steely composure enabled them to weather the storm and edge upfield, where a scrum penalty allowed Farrell to land three points.

With Courtney Lawes acting as a wrecking ball in defence and Ben Youngs kicking smartly it was possible to draw first blood, but they were soon forced to defend furiously inside their 22.

After directing two lengthy penalties into touch, Gareth Anscombe took the points when given a third chance but Wales fell behind again in the 27th minute to a try that was partly of their own doing.

Seemingly in control of a maul, Ken Owens allowed the ball to squirt out under pressure from Lawes and Billy Vunipola reacted in a flash by releasing the backline.

Henry Slade made a muscular run and several phases later Tom Curry spied his chance, exploiting another Welsh lapse to break from the back of a ruck and dart over from close range.

The first half ended with England dominant as Jonny May kicked upfield before showing pace to single-handedly bundle the home cover into touch.

Farrell and Wales captain Alun Wyn Jones were asked by referee Jaco Peyper to calm the players down following successive scuffles, the second of which saw Manu Tuilagi grab Lee Williams by the throat.

With the warning came a shift in momentum as Anscombe booted a penalty before the fly-half was hit late by Sinckler, resulting in Peyper's intervention and the opportunity for pressure to build again.

Sinckler then held Alun Wyn Jones around the neck at a maul, enabling Anscombe to reduce the deficit to a single point, and England were clearly reeling as Farrell sent a kick out on the full.

It took a bulldozing run from Tuilagi to push Wales back and Farrell was able to kick a penalty, but waves of attacks from the red shirts eventually took their toll on Eddie Jones' men.

There was nothing fancy about the hard carries that thrust England backwards and a long pass eventually created the chance that was taken by Hill.

It was all Wales in the closing stages and they landed the final blow when Adams outjumped Daly to secure Biggar's kick and slide over, sparking wild celebrations amongst home fans.