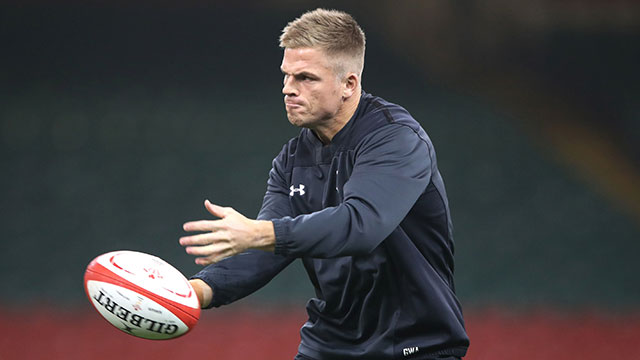 Gareth Anscombe will start at fly-half for Wales in Saturday's Six Nations clash against England at the Principality Stadium.

Anscombe has been preferred to the more experienced Dan Biggar, with Wales head coach Warren Gatland naming a team showing just two changes from the side that beat France three weeks ago.

Dragons lock Cory Hill replaces Adam Beard as skipper Alun Wyn Jones' second-row partner, while scrum-half Gareth Davies takes over from Tomos Williams, who was not considered due to injury.

Scarlets star Halfpenny, who last played on November 10 when Wales beat Australia, trained with Wales this week but he is not involved in the matchday 23.

And Davies is one of four survivors from the side that crushed England's Grand Slam hopes through a spectacular 30-3 win in 2013, being joined by captain Jones, wing George North and flanker Justin Tipuric.

Wales and England are the tournament's only two remaining unbeaten teams this season, with Saturday's encounter being billed by many as a Six Nations title eliminator.

Victory for Wales would see them make it 12 successive wins, breaking their record of 11 games undefeated that was set between 1907 and 1910.

England, though, have won the last five Six Nations encounters against Wales, including two in Cardiff.

Gatland said: "We are really happy with the experience we have got in the side.

"We've had a great two-week lead up to this game, we've looked really sharp and the squad are incredibly motivated to kick on.

"We know how important this game is for the rest of the championship.

"It's a massive challenge playing against an England team that is playing really well and with a lot of confidence, and we've got to make it difficult for them on Saturday."

Gatland said at his press conference: "England have done pretty well. Tactically they were very good against Ireland. Our aerial game will have to be good.

"We have trained exceptionally well. There is no doubt they will try to take us on at set piece time."

But the Wales boss criticised England's schedule for the week.

"Travelling through Newport at five o'clock isn't the best thing to do."