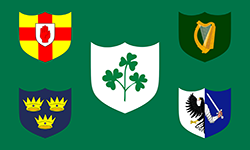 Ireland played three home matches (vs Wales, Italy and Scotland) and two away matches (vs France and England) in the 2016 Six Nations Championship.