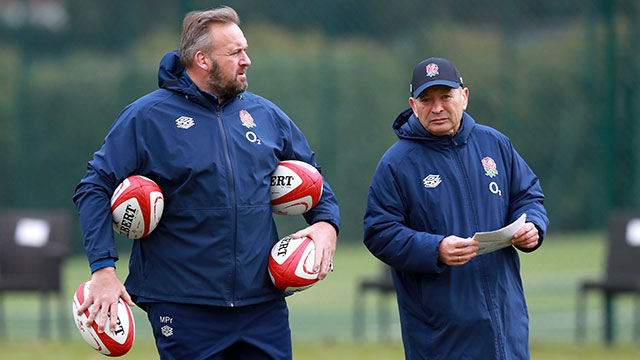 England’s preparations for their Six Nations title defence have been disrupted by Eddie Jones being forced to self-isolate after his assistant Matt Proudfoot tested positive for Covid-19.

Proudfoot has been diagnosed with coronavirus following Monday’s testing ahead of the Championship and, as part of contact tracing protocols, Jones and his attack coach Simon Amor are quarantining for 10 days.

If the next test reveals the outbreak is limited to Proudfoot, who is not displaying any symptoms, Jones will join up with the squad at St George’s Park next Thursday.

The head coach will name his 28-man party for the Six Nations on Friday as scheduled and his management team are continuing to work virtually, with the opener against Scotland on February 6 looming on the horizon.

“Head coach Eddie Jones and Simon Amor have been identified as contacts and will also isolate for a 10-day period, in accordance with Government guidelines.”

Proudfoot joined Jones’ staff in time for last year’s Six Nations after excelling as Springboks forwards coach, culminating in their victory in the World Cup final.

It is the second time in three days that England’s management team have been affected by coronavirus after it was revealed on Monday that Jason Ryles would not be available for the Six Nations.

Ryles, the respected skills coach, has chosen not to travel from Australia to London with his family due to the lockdown in place in the United Kingdom.

Of Jones’ front-line staff, only defence coach John Mitchell is not currently affected by Covid-19.

Unless the outbreak spreads, England should face minimal complications ahead of the Calcutta Cup showdown at Twickenham due to the timing of Proudfoot’s positive test.

Six Nations organisers are confident the tournament will take place as scheduled, despite misgivings from the French government over the prospect of Les Bleus travelling to Dublin and London for away matches.

This latest development could enhance their fears at a time when rugby in England is going through a two-week break due the cancellation of the final two two rounds of European group action.

To plug the gap left by Ryles’ absence, England have appointed Ed Robinson to oversee skills training for the duration of the Six Nations.

Robinson, 27, is a left-field appointment who works as an assistant at Greene King IPA Championship side Jersey Reds.

“Ed is a talented young coach and will work to help the players improve. We understand and support Jason’s decision and are expecting that he will be back with us this summer,” Jones said.